Feedback and other tidbits

Did you notice I took a breather for a few months and didn't post anything? Sorry about that. Life gets in the way of hobby projects.

I've had some interesting feedback on this letters project.

"This is a fascinating project and blog and a great example of online community history at work... Thanks for sharing." This came from a comment from Pauline Cockrill, a community history officer with History South Australia. She was thanking me for acknowledging my use of a photo of Sturt Street School on my post Who was George WWB Hughes?

I was also contacted by email by a researcher from King's College in London. A photo of George WWB Hughes outside the Shakespeare Hut in London in 1918 caught her eye. She is part of a team researching the commemoration of Shakespeare in 1916, especially in London and Sydney, and is looking for first-person reminisces about the Shakespeare Hut. George spent a lot of time there during the First World War, but I don't have his letters from that era, so I'm not sure how helpful I can be. We'll see what turns up. This researcher and her colleague were very complimentary of this blog, calling the project "fascinating".

"Fascinating" seems to be a recurring theme.

I thought it was also interesting to note that my post about the RMS Niagara was useful to blogger Nick Pelling on his blog Cipher Mysteries. It was able to help him determine that the British ship Niagara made a regular stop in the Hawaiian Islands, even though Hawaii was a U.S. port.

Why do I mention these things? Because knowing that people are finding use in some of the things I'm posting is motivating. So if you have any feedback or if you find any information on this site useful, let me know.

Now, on to the content of letters No. 15 and 16. There isn't much that isn't put into context by the post Noel's arrival in Chicago, but there are a few tidbits that I find interesting.

In letter No. 15, George mentions a music festival that Noel attended. It's a quick reference. Just three sentences: "We were very interested in your picture of the musical festival. It must have been a remarkable sight. It was good of Larry to take you to it."

Out of curiosity I did an internet search for music festivals in Chicago in 1931 and found that the music festival in question could easily have been one of those put on at the suggestion of Mayor Anton Cermak. According to Wikipedia:


"In 1931, Cermak suggested free concerts to lift spirits of Chicagoans during the Great Depression. The Depression and the proliferation of new technological innovations such as records, radios and sound films led to a declining demand for live music and a shrinking job market for musicians. That year ...  the Chicago Concert Band Association offered to organize a seventy-person concert band to give free summer concerts if the Park commissioners would build a band shell that had electric lighting and dressing rooms. ... The opening of free concerts commenced on August 24, 1931."

What is significant about these concerts is they started a great tradition of summer music festivals in Grant Park. It's fun to imagine that Noel might have attended one of those and even sent a photo back to his family. The timing of the letters is right.

In that same letter, George mentions, with a bit of surprise, that Noel is earning money by doing typing work. Not that George didn't know that Noel was a trained typist.

Among Noel's papers, I found a transcript from Stott's Business College in Melbourne, which Noel attended from 1926-27, studying bookkeeping, shorthand and typewriting. The transcript listed Noel's typing speed at 50 words per minute at his time of course completion. According to Wikipedia, 50 words per minute is in the average speed range for a professional typist. Not anywhere near the fastest, but still in the range of average.

I think the value of Noel's typing skills was firmly impressed on him by his work experience in 1931. I know that Noel's son, my father, learned to type in school, and he then, in turn, made sure that my sister and I knew how to type. This is long before the age of keyboarding, when the primary use of typing would have been secretarial, and my father was in no way trying to push us toward secretarial careers.

The Queen Carnival and Wirth's Olympia 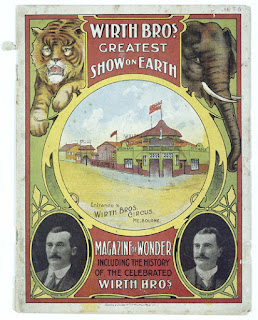 Finally, the Queen Carnival Competition is nearing an end in these two letters. I can only wonder what it was like for Noel to follow the competition via letter from afar. As I've mentioned before, it's not obvious from the letters, but Kath Lilford was Noel's girlfriend at the time and he had every intention of going back to her after college, which explains the detailed coverage in the letters.

I love the reference in letter No. 15 to little sister Edith, who was only 11 at the time. I can imagine her excitement at being involved in such an affair. "Edith is tickled to death because she is to help Kath. in the Queen Crowning ceremony. She is to be either the Crown Bearer or a Page to Kath."

I was also curious about the mention of Wirth's Olympia as the venue for the Queen crowning. From what I could learn through searches, the site was across the street from the Melbourne YMCA (on a site also now part of the Arts Centre complex) and the home of Wirth's Circus, billed as the "Greatest Show on Earth".

In North America we think of the Ringling Bros. and Barnum & Bailey Circus when we hear the title "Greatest Show on Earth". I can't help but wonder how the two circuses would stack up.
Posted by Haley H at 16:20