In pursuing this letters project, I’m constantly trying to unearth the back story that makes the letters more interesting. And because the letters are only one side of a conversation, I sometimes have to search a little to make sense of the conversation.

In several of the recent letters, George has commented on Noel’s school work and grades. Luckily, Noel left us some clues on those subjects in some of the papers he saved.

Some of those papers help paint the picture of the steps Noel took to attend college in the United States. More of those papers show how he did when he actually got to college. In the next two posts I will try to paint some of this back story, and then fill in the other side of the conversation.

If I were writing Noel's story as a novel, there are a couple moments that strike me as being a great place to start the book.

Noel identified one of those moments himself when he wrote, later in his life, about his relationship with his former girlfriend, Kath Lilford:


“On June 19, 1931 the Hughes Family together with Kathleen gathered at Spencer Street Railroad Station to bid Noel ‘God Speed’ and a successful college future. Even now in 1986, I can still visualize the group, and Kath in particular, standing there as the train pulled out of the station.”

Another place to start the story would be only six days prior to that departure, 13 June 1931, when Noel received word that he had officially been accepted into the YMCA Training College in Chicago. 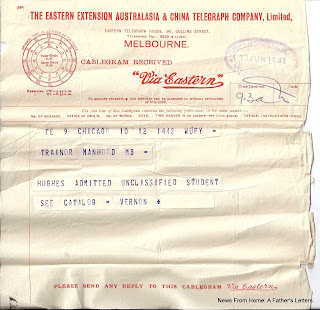 It's the telegram that seemingly set everything in motion: "HUGHES ADMITTED UNCLASSIFIED STUDENT".

The time up to that event must have been filled with tremendous uncertainty. A letter from the YMCA acknowledging Noel's resignation from his position there is dated 10 June 1931, before the confirmation telegram even arrives, so there might have been an indication that the acceptance was coming. Or the letter is dated wrong.

Regardless, his immigration visa in his passport is dated 15 June 1931, and George's first letter is dated 19 June 1931, the same day Noel boarded a train for Sydney.

All this paints a picture of a very stressful and hasty time planning a life-changing decision to travel half way around the world to attend college.  What would Noel have done if he hadn’t been accepted? Would he have made the journey to attend the World YMCA conferences in Toronto and Cleveland anyway, and then returned home? Would he have attended university in Melbourne and pursued a career in the YMCA? Would he have married Kath Lilford?

Why did Noel choose to go to school in Chicago?

From the letters, it’s apparent that some Australians who were serious about a career in the YMCA sought training in the United States.

As best as I can tell from the letters and a little online research, there were two YMCA training colleges in the United States that the YMCAs in Australia tended to use. One was in Chicago (The Young Men’s Christian Association College, later George Williams College, and today part of Aurora University) and the other in Springfield, Mass. (Springfield College).

According to a History of George Williams College on the website of the Kautz Family YMCA Archives, University of Minnesota Libraries:

"In 1890, when full-time YMCA work was becoming professional, requiring more intensive training, a year-round 'Training School' was established under the same leadership. The new school was located in Chicago, Illinois and was greatly influenced in its human service mission by the social and educational changes going on in that rapidly growing, industrial city.


"While evangelism and 'Christian work' was clearly at the heart of both the YMCA and the training school, the work of the association was never dissociated from a social service purpose. The service mission was one of sensitivity to problematic social situations young men faced as they migrated from the rural families and communities to an urban industrial environment."


If Noel was intent on pursuing a career as a YMCA secretary, like his father, the two training colleges in the United States seemed like good options. But the Melbourne YMCA experience with Springfield College seems much stronger.

Ivor Burge, a colleague of Noel's at the YMCA of Melbourne, had just returned from Springfield a few years prior.

“We have had good word from Dr. Doggett, concerning the four Australians at Springfield. He writes in the highest terms of the four men -- Evans, McRae, Jones and Laing, and of course asks for more. I think you have got to do your share in building up a tradition in connection with the Chicago Y College. Now that Glover and yourself are in the student body, it is up to you to endeavor to secure the interest of other men so that the number at Chicago may be increased.”

With such a strong existing relationship between the YMCAs in Australia and Springfield College, I’m not sure why Noel chose to attend school in Chicago. Perhaps it was because of Clive and May Glover and the fact that Clive was studying in Chicago. I haven’t determined the relationship the Hughes family had with the Glover family, but based on passing references in the letters, there seems to be a family friendship, and the Glovers were a tremendous help to Noel on his arrival.

So, that’s the best I can determine at the moment as to why Noel chose Chicago.

Noel also left us some clues as to what he had to do to get accepted into the college.

Noel was not an exceptional student in high school. According to a letter of reference from Melbourne High School, he achieved a Sub-Intermediate rating on his completion of school.

In the unsigned copy of a letter from someone at Melbourne High School, that person explains, “The standards are – Sub-Intermediate, Intermediate, and Leaving Certificate, in that order, a pass at Leaving qualifying for entrance to the University.”

The Australian high school tradition and the U.S. college admissions didn’t even seem to speak a common language when it came to evaluating students and their academic achievements, and translation had to be done.

“This is the nearest approximation I can make to your system of ‘credits’,” writes the Melbourne High School contact.

It appears that Noel only had 2 years of high school, which may have been fairly normal at that time. I’m not sure. But it seems short, especially for someone who was college bound. The family moved from New Zealand to Melbourne in March 1924. Noel would have been 14 years old. He attended Melbourne High School in 1924 and 1925, which means he would have been 16 at his completion.

According to his recommendations from the Melbourne YMCA, he worked with the YMCA for over four years before he left for the United States in 1931. So he started that affiliation probably in 1926.

He attended Stott’s Business College in Melbourne 1926-27, where he studied bookkeeping, shorthand and typing. According to his reference letter from CH Holmes, the principal of the college: “I might mention that we always found Hughes to be a well conducted boy, and well liked by both his fellow students and teachers.”

In 1931 he started studying with George Taylor & Staff. According to the letter from Geo. Taylor: Noel “has been doing revisionary work with us during the current year in Arithmetic, Algebra, History, Geography, and English with a view to attaining the Intermediate standard of the Melbourne University in these subjects.”

The letter from Stott’s Business College is dated 5 Feb 1931 and addressed specifically to the Chicago Y College. The letters from Melbourne High School and George Taylor & Staff are both dated in April 1931.

It’s clear Noel started exploring the decision to go to Chicago by early 1931, but he also might have had an alternate plan to pursue admission to Melbourne University.

But even though Noel was accepted to the Chicago YMCA Training College, there was still a lot of uncertainty about his education when he left for the United States. On his arrival he had to take an entrance exam. In George’s letters to Noel as Noel is making his journey to Chicago, George frequently reminds Noel to study for that exam.

“I have not written to the College authorities regarding yourself, because I felt that it was not right for me to use my position in any way to secure additional recognition for you. I will, however, write them shortly. By now you will have had your entrance status determined, and your plans laid out for your school work.”

How did Noel do with his entrance exam? It was determined that he lacked one year of high school credit, so his scholarship was conditional on him completing four units of high school work within two years.


In Letter No. 29, George makes a very telling remark in response to Noel’s advice to his little sisters:

“I am rather amused at your reference to ‘make them study’. I wish to goodness I could have drummed the same thing into your head when you were here! I tried hard to get you to realise that you were taking things far too easily, and trusting to pot luck to get through on the American end. Now you realise how essential it is to have adequate preparation so as to get advanced standing.”

All this leaves me wondering:

Can anyone offer insight into how the high school certification program in Melbourne might have worked when Noel attended in 1925? What does it mean to be Sub-Intermediate? To finish when you are 16?

How does one apply to a college half way around the world when mail moves at the speed of a ship?

And do I have to go through the University of Minnesota Libraries to view a Chicago Y College Catalog from 1931?